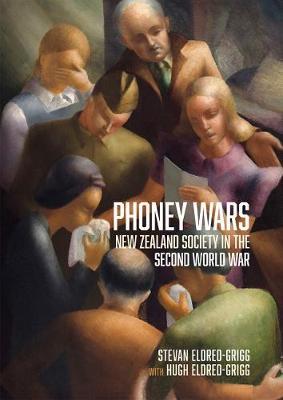 Phoney Wars looks at the lives of New Zealanders during the greatest armed struggle the world has ever seen: the Second World War. It is not a political, economic or military history; rather it explores what life was like during the war years for ordinary people living under the New Zealand flag. Stevan and Hugh Eldred-Grigg explore New Zealanders' hopes and fears, beliefs and superstitions, shortages and affluence, rationing and greed, hysteria and humor, violence and kindness, malevolence and generosity, to argue that New Zealand need not have involved itself in the war at all.

"Stevan Eldred-Grigg defies classification. He can swoop from the historical to the contemporary, from lyric to polemic, from fiction to faction. Hes unsettling as well as absorbing." --David Hill, New Zealand Herald

Stevan Eldred-Grigg is a leading novelist and historian. His first novel, Oracles and Miracles, was a runaway bestseller. He is the author of many other books, fiction and non-fiction, among them Diggers, Hatters and Whores: The story of the New Zealand gold rushes (2008), and White Ghosts, Yellow Peril: China and New Zealand, 17901950 (2014). Two earlier books focused on the world wars. Kaput! (2000) is a novel that tells the story of an ordinary German housewife and mother coping with Nazi dictatorship and Allied bombing. The Great Wrong War: New Zealand society in World War I (2010) polarised readers, with its author accused by some of betraying his country, while others congratulated him for setting the record straight. He now turns his uncompromising gaze on WWII. Hugh Eldred-Grigg was born in Canterbury and graduated with an MA in political science from Victoria University of Wellington. Since graduating he has worked as a teaching assistant at VUW, a high school language teacher in Japan, a lecturer at Xiamen University in China, and a high school teacher in Estonia. Still in Estonia, at present he works in financial technology. He is the author of What if the Moyle Affair had never happened? in Stephen Levine (ed.), New Zealand as it Might Have Been (VUP, 2006).