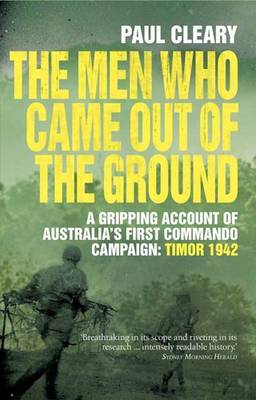 The Men Who Came Out of the Ground

By February 1942 the Japanese had invaded the Dutch East Indies as part of their push south. All that stood in the way of their moving significant resources to take part in the main fighting in Papua New Guinea was a force of 700 Australian commandos and a few hundred Dutch soldiers. After months of skirmishes and attacks on Japanese forces, the Australians faced a major offensive and despite the best efforts of the individual soldiers, Australian forces were withdrawn at the end of 1942. But by then an entire Japanese division had been prevented from taking part in the Papua New Guinea campaign. THE MEN WHO CAME OUT OF THE GROUND tells the story of the heroic fighting, courage and ingenuity in the face of supply and equipment problems, and the support and friendship of the locals. It's the story of Australia's Special Forces in action and achieving what they set out to do.

'Paul Cleary has brought to life one of the great success stories of World War II' Daily Telegraph ' This account ... is breathtaking in its scope and riveting in its research' Sydney Morning Herald 'A cracker of a read The Age

Paul Cleary is a journalist who writes for the Australian Financial Review and the Wall Street Journal. He also worked for the World Bank as an adviserto the government in East Timor from 2003 to 2005 and is fluent in Tetum (the main language of the indigenous group of East Timor).