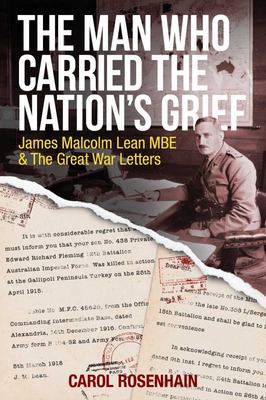 Man Who Carried the Nation's Grief

'I do feel the loss of my two boys, they was my all ...' wrote grieving father Ernest Watts following the death of his two sons. Like thousands of Australians during World War I, Ernest Watts received his tragic news through the office known as 'Base Records'. This letter was just one in a series of correspondence that lasted the duration of the war and well into the post-war period. Every letter was answered with patience and courtesy and every response carried the same signature: J.M. Lean. The Man who Carried the Nation's Grief describes the extraordinary work of James Lean, whose office at times received over 100 letters a day from distressed families. The letters selected by author Carol Rosenhain are quoted verbatim in all their rawness, the grief, anger and disbelief of the writer signifying wounds that would take years to heal while others never would. Like those of Ernest Watts, the letters often form part of a chain of correspondence that lasted well beyond the Armistice of 1918. For one shattered father, the fate of his missing boy would never be resolved, his son's final resting place only discovered in Pheasant Wood almost a century after he met his death. Given his crucial role as the link between anxious families and the bureaucracy of the AIF, James Lean's remarkable work is a surprising omission from the vast body of World War I literature. Carol Rosenhain's book rectifies this omission with a portrait of Lean himself and the grim task at which he excelled. This is a book that describes

Carol Rosenhain is a Melbourne writer and historian. Educated at Monash University, she has been a passionate teacher of English and History at senior secondary level for many years. Carol was recently the recipient of a prize in the Box Hill RSL Centenary of WW1 Short Story Competition.